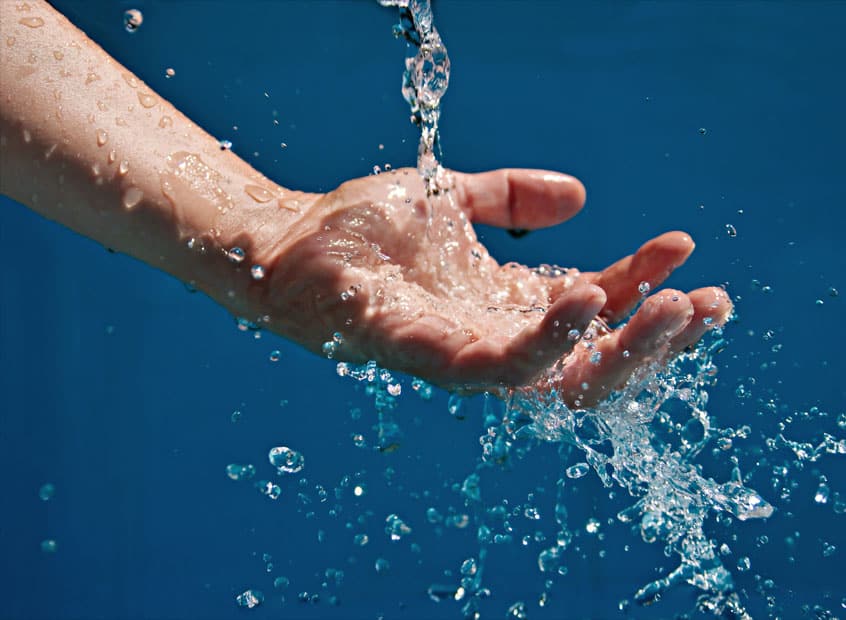 Drink it, soak in it, listen to its music… water can soothe in all its forms.  Ah, water … sometimes just the thought f it can sweep us along in a current of happy memories, leaving stress on a distant shore.  But that relaxed feeling is not just due to pleasant images of sunny childhood afternoons playing in sprinklers or of breezy family vacations at the beach.  Recent scientific studies show that the stress-alleviating, mood-improving, tension-reducing power of good old H2O also has to do with the way it affects body chemistry and neurology.  Whatever the method, water works wonders – so dive in and de-stress!

SWIM IN IT Sure, an intense session of lap swimming can give you a stress-busting “runner’s high” of endorphin release without overstressing your joints.  But even a leisurely paddle in the pool can boost your mood. Jack Raglin, PhD., a professor of kinesiology at Indiana University, found that light exercise (such as a leisurely swim), during which participants were not exercising hard enough to generate endorphins, still produced significant mood improvements.  “The swimmers I work with daily feel they can ‘face the day better’ after getting out of the pool,” says Bruce Becker, M.D., a professor at Washington State University College of Education who specializes in the effects of aquatic immersion and exercise on human physiology.  “That effect is seen with exercise in general, but it seems to be more true with exercise in water, although we’re not sure exactly why.”  Even splashing around with the kids should have a positive effect on the nervous system, Dr.  Becker speculates.  If you can’t make it to the swimming pool, other types of aquatic immersion, like a soak in a bath or a hot tub, offer more accessible stress relief.  Even a splash in the sink might help. (For more details on that, read on!)

SOAK IN IT You already knew a bath helps you unwind.  Now there’s proof:  Dr. Becker recently studied the effect immersion in varying temperatures of water – cool, neutral, and warm – has on healthy adults.   After about 24 minutes, the central nervous system patterns of the subjects in warm water were essentially identical to those of people who are relaxed and focused, says Dr. Becker, “Other studies have found that  it decreases depression and anxiety”, he adds.  The way it works is a matter of speculation.  It may be that buoyancy plays a role, or that warm water gives us the same sensation we experienced while floating in the womb.

Whatever the reason, a relaxing bath – even just a footbath – can also improve your sleep, which may in turn lead to more energy and less stress.  A 1999 study in the Journal Physiological Anthropology found that women who took either a 20-minute bath or soaked their legs (up to their knees) in hot water for 30 minutes were able to fall asleep more quickly and had better-quality sleep compared with those who did neither.  “I wish women would stop thinking of baths as a luxury and instead make them an essential part of their lifestyle to alleviate stress and reenergize,” says Kathleen Hall, Ph.D., founder and CEO of the Stress Institute, in Atlanta.  Unable to squeeze in a good soak?  Hall suggests simply running warm water over your wrists for 30 seconds for instant relaxation at any point during the day.

DRINK IT Though you may not need to down a full eight glasses a day, too little water can have negative effects on your body and mood, resulting in more stress.  “Once you start to feel thirsty, you’re already somewhat dehydrated,” says Debra Boardley, Ph.D., R.D., a professor of public health at the University of Toledo College of Medicine.  “And we know from research that if you’re even mildly dehydrated, you’ll feel more tired and drained and less able to concentrate.”

A 2001 study found that mild water restriction (no fluids or food from midnight to 11 a.m.) had a negative effect on self-measured alertness.  Another found that after just 13 hours without water (think one long, busy day), subjects reported decreased concentration and alertness as well as more headaches.

Your weight and activity level, the air temperature and humidity all affect fluid needs and some people simply take longer to dehydrate than others.  Dr. Boardley says some general tips she’s heard include drinking a glass of water with each meal, as well as one glass in between meals and hydrating before and after exercise.

SPLASH IN IT Wish there was such a thing as antistress spray?  Get thee to a waterfall.  The air at the bottom of waterfalls contains a significantly higher amount of negative ions, electron-packed molecules that have been shown to have an antidepressant effect.  A 2006 study done at Wesleyan University found exposure to negative ions alleviated depression within 15 to 30 minutes.  The study’s lead author, Namni Goel, Ph.D., a psychiatry professor at the University of Pennsylvania, thinks on possibility is that negative air ions increase the amount and activity of serotonin (a chemical that regulates mood) in the brain.

No time to venture out into nature?  A higher than normal amount of these ions may also be found near park fountains or sprinklers.  So the next time you’re near splashing water, stop, relax and breathe in deeply.  Or try simply taking a shower.  Researchers at the University of Wisconsin-Madison found that just a five-minute warm shower led to a significant anxiety reduction in study participants.

LISTEN TO IT Doesn’t it seem that you can literally feel your blood pressure plummet during a day at the beach?  It’s not just the soothing sensation of sinking tired toes into warm sand:  The sound of the surf may be part of what’s calming you down.  Researchers at the Huntsville (Alabama) Hospital tested the effect of ocean sounds on patients by playing these sounds for three consecutive nights.  Another group of patients received the same care but no ocean sounds.  the ocean group subsequently reported better quality of sleep, fewer awakenings and deeper sleep overall.

The steady rhythm of breaking waves or the even roar of running water may be why it’s so soothing.  Our brains respond positively to repetitive sound, according to David Swanson, Psy.D.. a clinical psychologist in Los Angeles.  For example, “If you’re at the beach, the waves come in sets and have a consistent rhythm, so it’s relaxing,” Dr. Swanson adds.  For instant indoor stress relief, try listening to a CD of natural water sounds or a tabletop fountain.